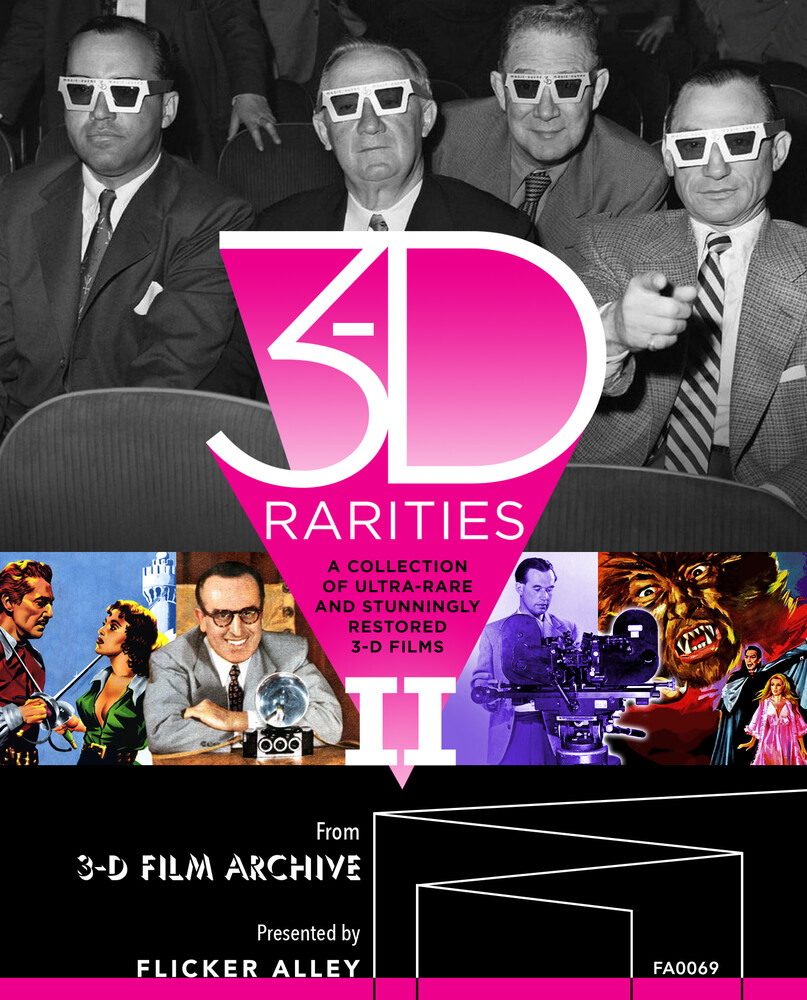 Blu-ray. 2020 release, the long-awaited follow-up collection of extraordinary 3-D wonders, including the feature-length El Corazón y la Espada, all expertly restored in a Blu-ray world premiere. For over 35 years, it has been the mission of the 3-D Film Archive to locate, save, assemble, and restore previously lost 3-D films. 3-D Rarities, Volume II spans over 40 years of international 3-D film production, and is appropriately presented in three segments. The first is a superb collection of short 3-D oddities, including the long-lost A Day in the Country; 3-D master Raymond Spottiswoode's The Black Swan; Stereoscopic Anthropologist Hillary Hess s presentation of Mid-Century Memories in Kodachrome Stereo; the mysterious Polaroid-filmed Games in Depth; a prologue for Frankenstein s Bloody Terror, a West German-Spanish coproduction originally filmed in Hi-Fi Stereo 70; and a trailer for the 1983 documentary The 3-D Movie, which serves as a brief historical showcase for a wide swath of classic 3-D films. Up next is the feature-length, historical romance/adventure from 1953: El Corazón y la Espada (aka The Heart and the Sword, aka The Sword of Granada). The first 3-D movie ever produced in Mexico, the original Spanish version of El Corazón y la Espada has not been viewed in it's intended format since 1955. Scanned in 4K and restored frame-by-frame from the original left and right camera negatives, the film stars Cesar Romero (The Thin Man; Batman) and Katy Jurado (High Noon; Broken Lance), alongside a veritable who's who of top Mexican actors of the time. Last but certainly not least is a special sampling of homemade stereoscopic photographs from silent film icon Harold Lloyd. Presented by Lloyd's granddaughter, Suzanne Lloyd Hayes, these slides are choc-full of Hollywood stars, and many of the images have never been seen at all by the general public! All of the material included on 3-D Rarities, Volume II is presented in high-quality digital 3-D. Restored and mastered direct from archival materials by 3-D Film Archive Technical Director Greg Kintz, the films and images have been meticulously aligned shot-by-shot for precise registration of the original left/right elements. This Blu-ray Can Also Be Viewed in 2-D, Playable on Your Standard Blu-ray Player.