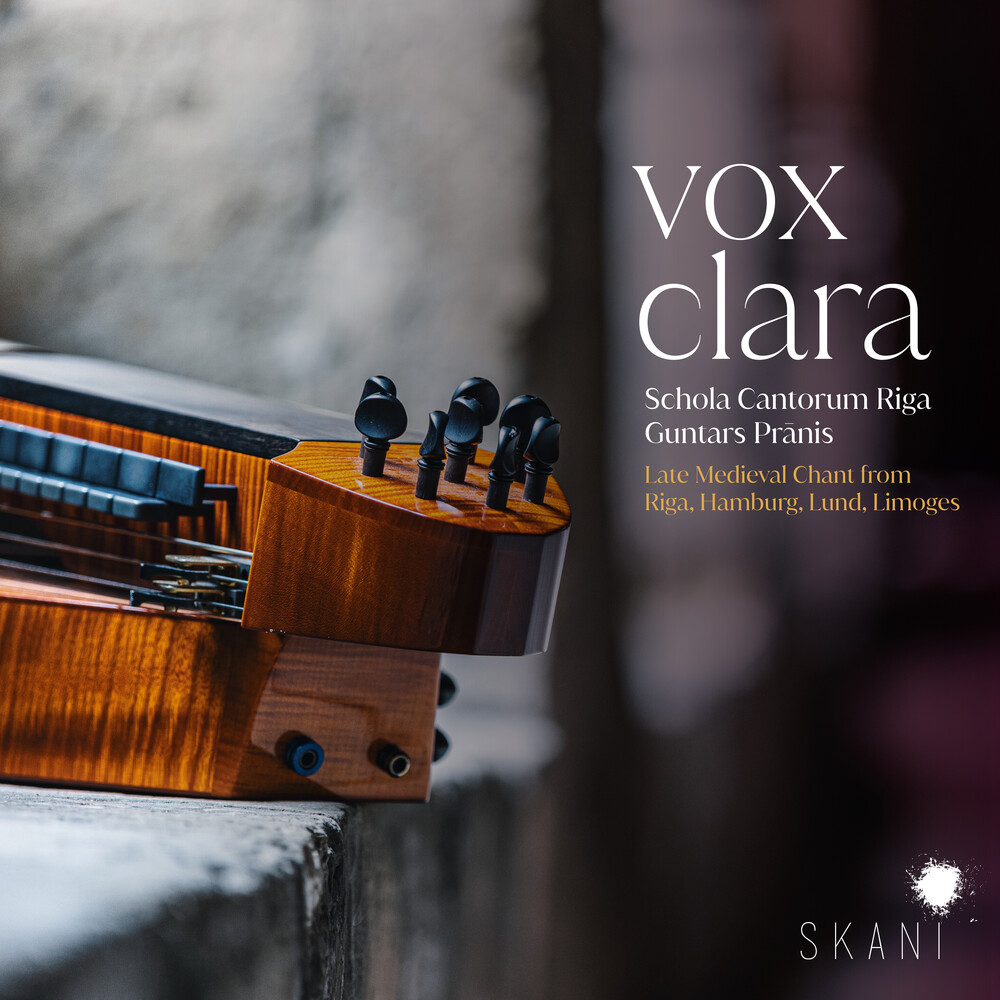 Latvia's Schola Cantorum Riga shines a light on the music of medieval Riga, Hamburg, Lund and Limoges in historically informed performances which aim to present the music as it would have been performed and heard in medieval Livonia (now Latvia). Interwoven with Christmas music, the album also includes world premiere recordings of recently discovered arrangements including Kyrie eleison ymas from Riga Cathedral's Riga Missal (Missale Rigense) manuscript. Led by the leading scholar of medieval music in the Baltic states, Guntars Pranis, the resident male vocal ensemble of Riga Cathedral, Schola Cantorum Riga, presents a unique insight into medieval Latvian music tradition in it's latest release from SKANi. Vox Clara features medieval music - Gregorian chant and examples of late medieval repertoire - to reflect the Northern European musical traditions of Hamburg, Riga and Lund as well as the rich heritage of early polyphony in Limoges. In the Middle Ages, each of these cities had it's own individual cultural expression and musical style. Although Gregorian chant still dominated sacred music during the period, it existed alongside a variety of paraliturgical and secular genres of music in which improvisation and the respective local musical traditions played an important role and inspired constant interaction. One and the same chant could sound very different depending on the location in which it was performed. Vox Clara offers a journey through this vivid and diverse musical life of late medieval Europe through a distinctly Latvian lens that has not been recorded before. Schola Cantorum Riga here performs the music in a way that serves to present something close to the true sound of sacred chant as it would have been performed in Riga during the medieval period. Inspired by the research of it's director Guntars Pranis, the ensemble draws on Riga's medieval chant tradition and the influence of folk tradition and polyphony that infiltrated sacred music during that time. The bagpipes, hurdy gurdy and ancient kokle instrument - all used in Latvian traditional music - and elements of the ancient form of traditional Latvian vocal polyphony, Teiksana or sauksana ("saying" or "calling") as heard in Miserere mei, help to present the ensemble's interpretation of how this music might have sounded in medieval Riga. The Veni Sancte Spiritus is sung in the early Latvian Livonian language, and the ensemble decided to sing the Latin words throughout the album in their local Latvian accent. The male vocal ensemble is resident at Riga Cathedral, considered the largest medieval church in the Baltics, which houses the Riga Missal (Missale Rigense). The 15th century manuscript - the first written musical document in Latvian history - describes church and liturgical life at the Riga Cathedral during the medieval period. Vox Clara includes the world premiere recording of Kyrie eleison ymas, discovered from this manuscript alongside world premiere recordings of arrangements from other sources including newly discovered versions of Veni Sancte Spiritus, Plangas cum lacrimis, Quasi stella matutina and Gaude Maria.